By: Kate Categories: laughing with you, not at you 2 Comments 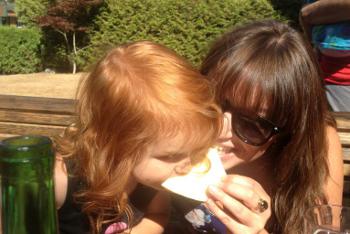 Lara’s daughter Hunter and I sharing a quesadilla.

When I was about 20 and going to school at Simon Fraser University, I lived with a peculiar girl named Lara. She and I have been friends for years – we shared a locker in high school and are still great friends today. Living with Lara was amazing and always surprising. Here are a couple introductory stories about Lara that will help convey her character.

Another time Lara rescued an injured pigeon and put it in a box in our kitchen with some of my lovely linens. She named this bird Carl, and fed him bread. One day while Lara was at work, Carl started flapping around quite a bit. He seemed to be ready to fly the coop – pardon the pun. I took Carl and his box of freshly ruined towels out to the yard where I let him go. When Lara got home, she wrote me a letter to say that I had committed an unforgivable act, and that we were officially friends-off. 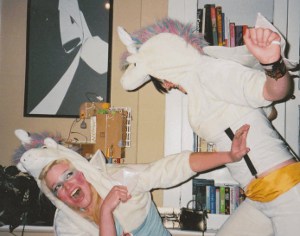 Lara and I dressed as the last and the second-to-last unicorns for Halloween.

The incident I am most fond of, however, is the Salami Incident. Lara left for work in the morning, headed to the busy Italian deli she worked at on Commercial Drive. At about noon, Lara called and asked if I could please come pick her up. She’d had an accident. When I picked up Lara, she had two nicely blackening eyes. She told me that she’d had a fall, but it wasn’t quite adding up. Inquiring as to the nature of her accident, this is what was reported.

Lara was rushing around the Italian deli, being yelled at by a variety of arrogant customers. It was a hot summer day and the fan was going. Just below the fan lay a stack of cut waxed papers. Just below that was an Extra Virgin Olive Oil spill from someone over-filling a jar of artichoke hearts. As Lara grabbed to two salamis that her customer requested, she hurried back to the slicer. In one swift and elegant production, the fan blew a piece of waxed paper onto the oil slick, at which point Lara’s foot made contact. Ass over tea-kettle, Lara hit the deck. The salamis shot into the air and fell back down, one of them landing squarely in the middle of poor Lara’s face. Hence the two black eyes.

It is rare that we get a chance to meet someone like Lara, and even rarer that we get to spend enough time with them to experience these amazing, prize winning entries for America’s Funniest Home Videos. Sadly, we never did get anything on film.

Dedicated to my dear friend Stuartyna5, who I love like a sister

laughing with you, not at you

While working at a restaurant in a sleepy little community called Roberts Creek,...
← I Saw the Sign
The Morphing Hippie →

Twas the night before Jakemas 👑

Get yourself a best friend who looks at you like

I drew these tinder profiles and will not be accep

Remember when I found that hot garbage book on a b

It's Thanksgiving not father's day but I'll still

Ruining what you came to see since October 1983


Error: API requests are being delayed for this account. New posts will not be retrieved.